SARRACENIAS ARE STUNNING AND EASY TO GROW (PART TWO)

Last time I began our three-part discussion regarding the native pitcher plants (Sarracenias) of the southeastern U.S. With eight species (nine if you count S. Alabamensis as separate from the S. rubra complex and about two dozen natural hybrids), you can have quite a collection in short order as there are lots of people selling and trading them. I know Matt at Carnivore Culture is working on increasing his stock, but it takes time, since propagation from seed to a young plant ready for shipping can take up to three years.

This time around, I’m excited to present an interview with Jim Miller, who many of you are probably familiar with thanks to his articles and photos that have appeared in the ICPS Carnivorous Plant Newsletter and tons of posts to Facebook groups. About ten years ago, Jim was the first person to discover the natural hybrid between Drosera filiformis floridana and D. Filiformis tracyi. He has been exploring CP habitats since 1971, so he was fortunate enough to see many locations in their original pristine conditions, but I’ll let him tell you more about that:

MR: You were lucky to see most CP sites when they were pretty much untouched. What are some of the places that shocked you the most when they were decimated?

JM: It’s hard to say, really, because there have been so many. The Green Swamp is probably at the top of the list because there were just so many plants growing over thousands of acres. It was the very first site I explored in 1971 and carnivorous plants were everywhere along with bog orchids and many other plant species that I’ll admit I never took the time to study.

There were several special sites that I would always visit. The first was a huge meadow covered with Venus Flytraps. They grew so thick that even the hardiest weeds and grasses couldn't compete. And keep in mind, this was one of the places that was commercially exploited for decades before I ever set foot there. The second stop was the best, because it had all of the species growing together. I found my first hybrid there (flava x purprurea). Right alongside the road was a huge swarm of Sarracenia rubra — the typical form. Then you had to cross a deep and wide drainage ditch by walking across a fallen tree. I slipped and broke my nose on that on my second trip there. The last spot was a huge colony of flavas so thick that they were almost impenetrable. Basically, I’d just stop at those spots and then hike in. My best finds were purpurea x minor and both rubra x purpurea and rubra x flava. I also found my first Drosera intermedia there and the northern form of Drosera filiformis in the mid-1970s. 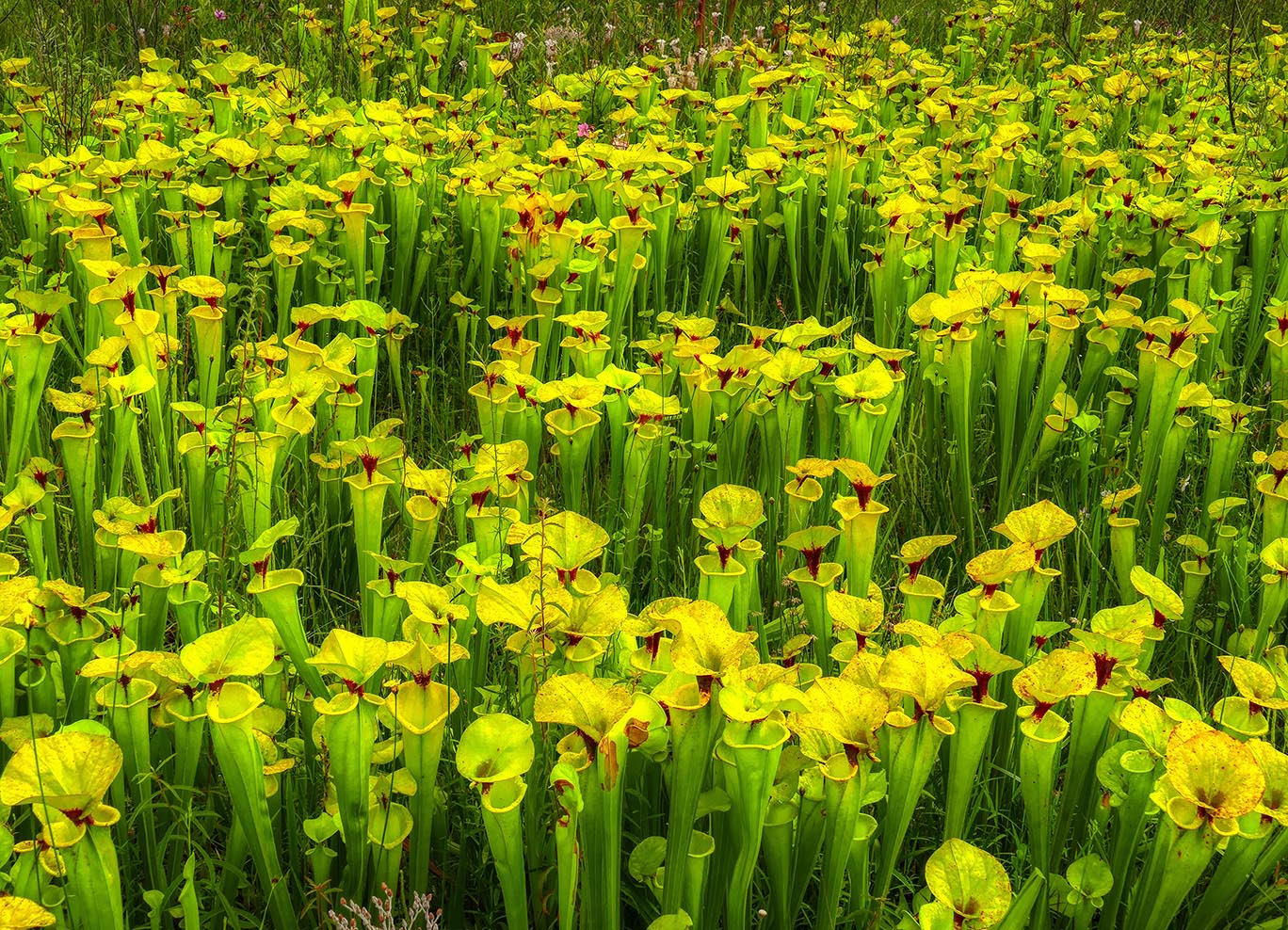 MR: So you must have been devastated when the Swamp was being drained and cleared.

JM: Inconsolable is more like it. I was with Bob Hanrahan and it was his first trip there. I think it was 1983. We arrived just after the land had been bulldozed, bush-hogged, disked and burned. Deep drainage ditches had been cut all through the Swamp and in a few places they were already planting pines and sweet gums [liquidamber trees]. We stood there and you could see thousands of dead or dying Sarracenias scattered about as far as the distant tree line. We started trying to rescue any that looked like they might possibly survive, but after a few hours in the blazing hot sun, we had to give up. The scale of the destruction was just too massive. I usually made the drive from Miami to the Swamp a couple times a year and had just been there a few months earlier. So when I agreed to take Bob to my favorite sites it was incomprehensible that so much habitat could be destroyed in so little time. Mind you, these sites, this whole area, had been commercially exploited for decades and yet I never encountered signs that people were digging up flytraps, pitcher plants and truckloads of sphagnum moss.

MR: That obviously was a horrible experience and I almost don’t want to ask you to go on from there.

JM: Well, if it had ended there it would have been bad enough, but year after year, trip after trip, I started encountering the same devastation. In fact, I think it was that same year that the well-known Yellow River site was wiped out. I loved that place because the plants were thick and there were so many interesting hybrids and backcrosses. Closest to the river you’d find rubra gulfensis and leucophylla and every imaginable cross between the two. Psittacinas were all over in all sizes. As you moved away from the river, it transitioned to mainly flavas and purpureas [now accepted as S. rosea] with some leucos scattered here and there. I found my first leuco x psittacina there in 1976. I’d never seen that cross and thought for a minute that I might have found a new species. There were huge clumps of Drosera intermedia up to 5 or 6 inches high and in the wettest spots there were giant Pinguicula planifolia. The whole area from the Yellow River west to Mobile — even in the city limits — and on to the Alabama-Mississippi border was amazing. Just driving along you could see acre after acre of flavas, alatas and leucos. Today you’re lucky if you find a small group of plants or even a single pitcher plant hanging on. If I had to guess, I’d say there are maybe 5% of the plants remaining all along the Gulf Coast. Lots of people are growing them, but there’s just nothing like seeing them in their natural environment. Still, I’m glad there are growers around the world so that the plants should hopefully be around for a long time, even if it’s in collections. 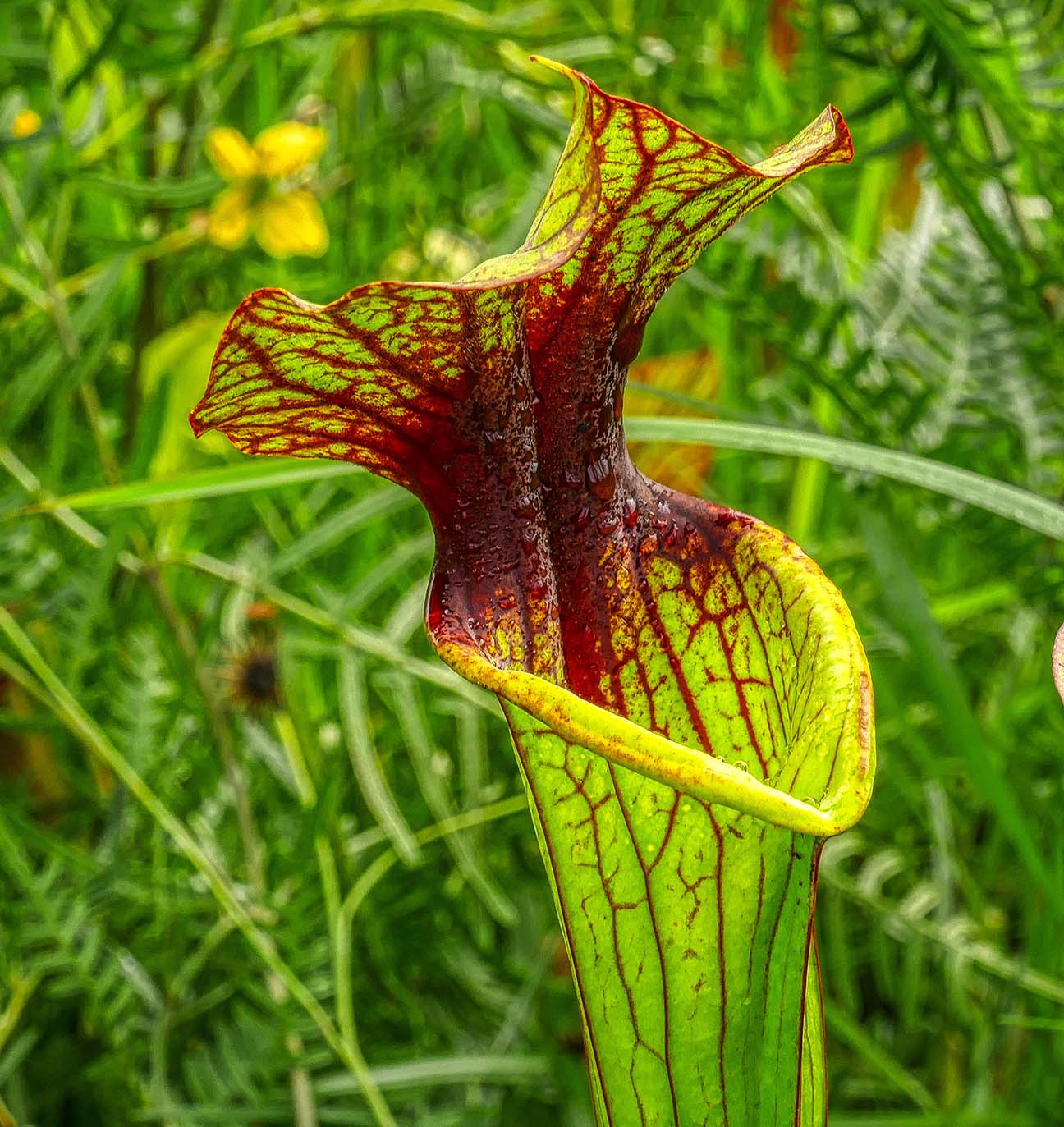 MR: Other than habitat destruction, are there any other threats to wild populations?

JM: For a while, the cut flower industry was hitting every big leucophylla site hard and taking the pitchers for use in floral arrangements. I remember when a friend got a big bouquet from her husband for her birthday and I was shocked to see a half dozen leuco pitchers mixed in with the flowers. I did some research and found that states gave out licenses to take a certain percentage of pitchers — I think it was 10% — but there was absolutely no enforcement, so they'd take them all. I showed the deep tire tracks and the cut stems on my second DVD release. But the really big leuco sites are pretty much gone now and by the early 1990s it really wasn’t profitable. I know of only one nursery that grows leucos commercially for that purpose, and I don’t see it lasting much longer.

Lately it’s been the uncertainty of the weather. In the 1970s, 80s, and even the 90s, you pretty much knew when the plants would start emerging from dormancy. If you’d head out the first two weeks of April, you could pretty much count on seeing the flowers and early pitchers of most species, though psittacina and minor typically don’t flower until late April or even into early May. But some winters have been so mild that the plants have started flowering in March. One winter, around 1987, we had snow and a hard freeze on April 4th. Drought is also becoming more common. A significant number of plants died in the field one year when we had a really dry winter. I’ve seen our weather patterns changing along the Gulf Coast and this definitely is a concern. Controlled burns are really important now, too, otherwise weedy plants and shrubs will quickly overgrow a CP habitat because they require less water from the thunderstorms that no longer happen as regularly as they did in the past.

Some people are hung-up on “poaching” as a threat, but in all my years, I have never seen a single site where it was clear that a bunch of plants had been dug up. Sure, there might be one or two holes, but that’s nothing when you compare it to how fast modern machinery can clear an entire field. In no way am I advocating that taking plants from the field is acceptable, but if you happen to be unaware of which plants are protected species and you dig one up and get caught, it’s a huge fine or even jail time if they want to push things. Yet ten or twenty thousand plants get ripped up to widen a road and nobody says, “Hey, before we start, maybe we should get a botanist out here to make sure we’re not wiping out an endangered species.” 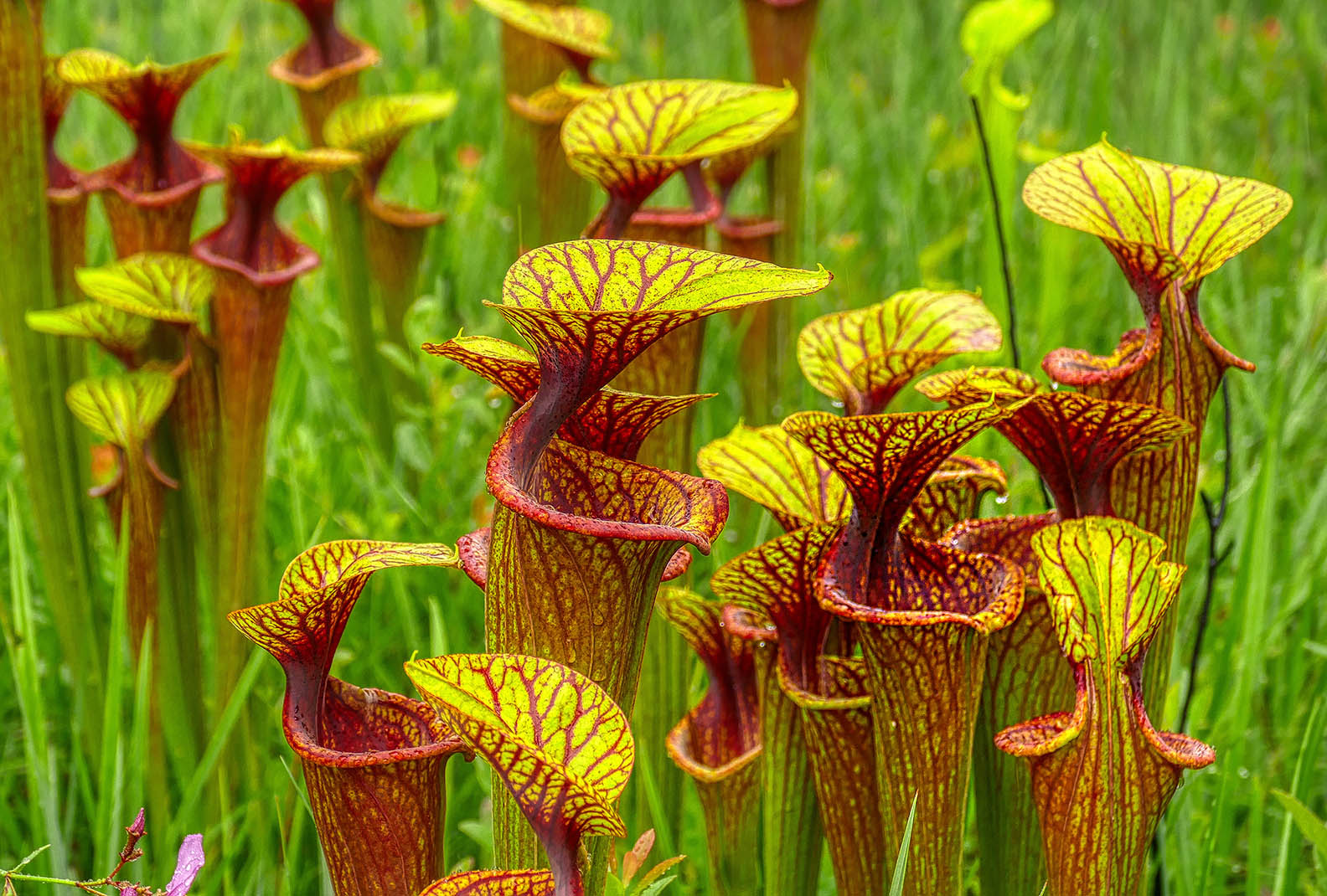 MR: You have some pretty strong feelings about this…

JM: Look, at some point, all plants were taken from the field, otherwise we’d have no plants to propagate. Pretty much every plant available commercially was originally dug up or removed from the field. For the record, I’d rather see a pitcher plant in the field than in a greenhouse. But I’d also rather see a pitcher plant in a greenhouse than destroyed. In the “good old days,” mowing roadsides was actually good for most CP, but today the use of herbicides means they will never recover. People want lawns, not fields of pitcher plants, so herbicides are used to make sure that Sarracenias don’t pop up in someone’s yard or along roadsides. It’s mind boggling just how many plants have been extirpated from along roadsides north of Mobile, Alabama, and just how fast it happened. One year there were huge populations and the next year nothing.

In our next installment, Jim and I discuss the best ways to grow Sarracenias and how to propagate them from seed, so that’s something you won’t want to miss. 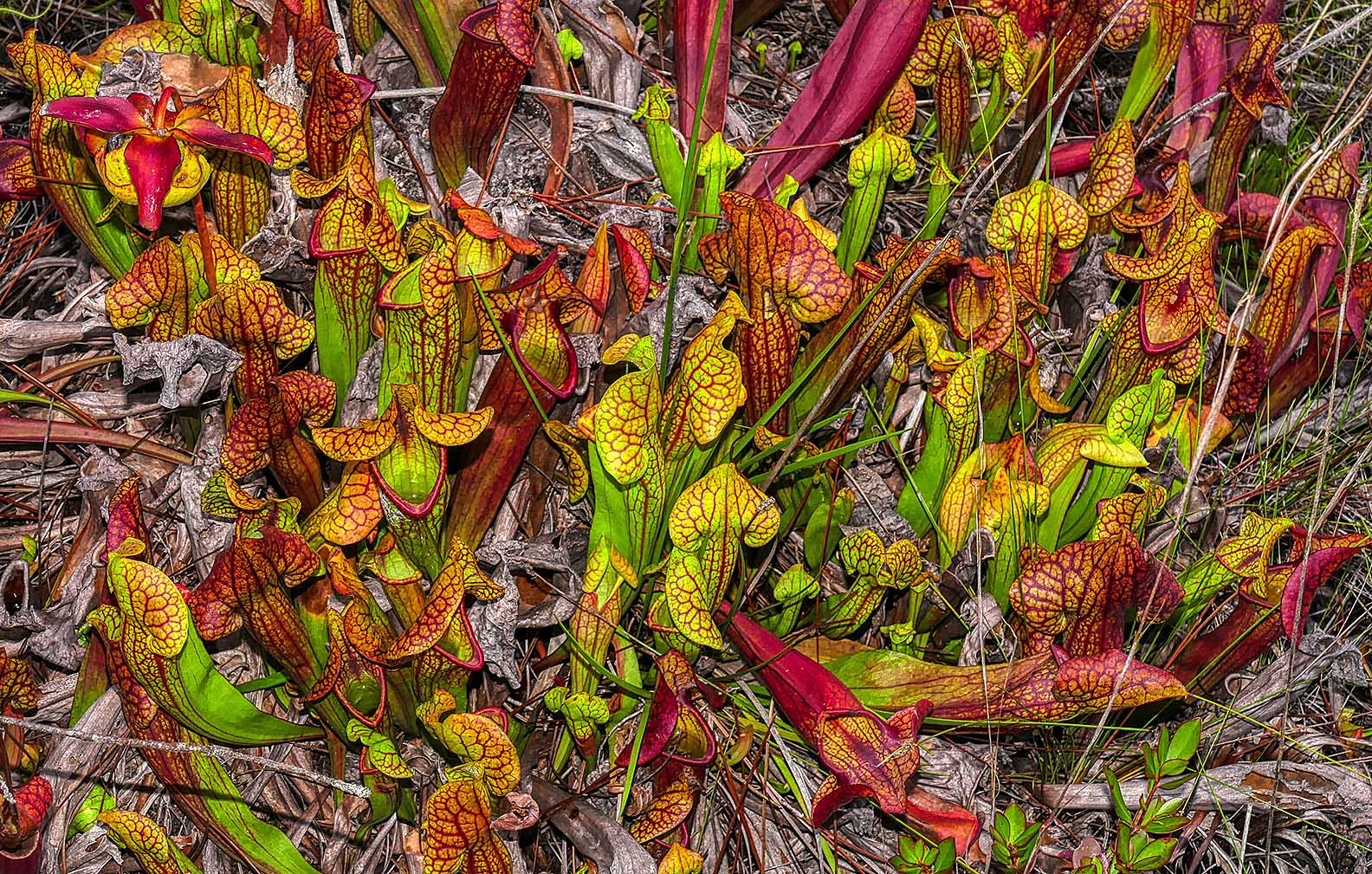