SARRACENIAS ARE STUNNING AND EASY TO GROW (PART THREE)

This time around I’ll be talking to longtime CP grower and Sarracenia expert, Jim Miller, about the best ways to grow our native North American pitcher plants. The topic could easily fill a book and the interview has been edited to fit the available space.

MR: Many people seem to have the idea that all the native Sarracenia can be grown in the same way. I know I did. But since we first spoke a few years back, I began to understand that’s just not the case.

JM: That’s understandable. There aren’t a lot of books or publications that get into the specifics of each individual species' needs. While it’s absolutely true that all of the species and hybrids can certainly be grown similarly, you have to realize that in the wild, different species often occupy different niches in the overall environment. A great example was the [now extirpated] Yellow River site. In the area closest to the river, you found S. psittacina, rubra gulfensis and leucophylla, along with many hybrids between them. As you moved to the northern end, which was somewhat drier, you found flava and purpurea [now S. rosea]. There were some leucos mixed in there, but not in significant numbers. Keep in mind that in a habitat like this, there are times when the whole site will be under an inch or two of water, like after a hurricane, but that water level tends to drop fast due to the Gulf Coast’s sandy soils. I’m no genius, so it took me a while to understand the significance of this separation of species.

MR: Which specific species do you find are the hardest to grow in your experience?

JM: Without a doubt, that’s S. minor. In the wild, you often encounter plants growing in surprisingly dry conditions. It’s difficult to maintain that dryness when the plant is in a pot that sits in a tray. I probably have more people contacting me about minor than any other Sarracenia. What’s weird is that the giant “Okee minors” grow in sphagnum “islands” that float in fairly deep water in the Okefenokee Swamp. And they obviously require that much water as they never rarely, if ever, maintain that giant size when grown alongside other species. To some extent, the same can be said for the “Okee psitts,” which also grow on sphagnum islands in the swamp. Both plants will adapt to “captivity,” but eventually look like typical specimens—at least that has been my experience. I personally grow Okee psitts as aquatics and your typical psitts quite wet — I almost never let them dry out. But many growers are not comfortable with this and so they will have a psittacina growing in the same tub or container as a flava or rosea, neither of which require as much water. Beyond that, the other plants I get asked about a lot are oreophila and leucophylla.

MR: What do you prefer to grow your Sarracenias in? Sphagnum? Peat mixes?

JM: Honestly, it’s usually more a case of what I have handy. If I could always have sphagnum on hand, I’d probably grow everything in it, mainly because it’s such a good indicator of potential problems. When you see the moss turning that slimy blue-green color, you know it’s only a matter of time before the plant you’re growing in it will have problems. This is why I so strongly recommend that anyone growing pitcher plants have a cheap pool water test kit on hand. Our water quality in Tallahassee is pretty good, particularly if we’ve had adequate rain, and I’ll use it in a pinch if necessary. Unfortunately it tends to be quite alkaline. So I’ll add distilled white vinegar and test until I get a mildly acidic reading with the test kit. I also let the water sit overnight to release the chlorine gas that is present in tap water. The pH of the water you use on your plants is critical in the long run, and if you are using water that’s alkaline, it’s only a matter of time until you start losing plants.

MR: What is your preferred peat mix?

JM: First off, if you’re going to use peat, make absolutely sure there hasn’t been any additives mixed in. For instance, MiracleGro peat moss has fertilizers added and that will kill the plants pretty fast. The bag will have the specific contents listed somewhere. If it’s anything other than 100% sphagnum peat, don’t buy it. K-Mart used to have great deals on pure peat moss, but they’re not around any more. If you’re not sure, buy the peat from a nursery and ask if there are additives. As far as mixes go, I shoot for about a 50-50 mix of peat and sand with some perlite to keep the mix from compressing. Honestly, I don’t measure it out, just mix it in until it looks right. I also add perlite to my sphagnum to keep the medium open, it seems to promote faster root growth, but honestly, there are times when I don’t have perlite, so I just use the moss.

MR: In terms of difficulty, which Sarracenias need the most attention?

JM: I’ve already mentioned S. minor. Some leucos do better in slightly drier conditions, while others don’t mind sitting in a tub with water. It’s really trial and error. You just have to be prepared to lose a plant or two until you get it right. I particularly don’t recommend newcomers try S. oreophila, due to its unusual growing conditions, which are generally in habitats quite different than most other Sarracenias. It’s usually found in montane environments rather than lowland bogs and savannahs, though decades ago there were populations growing in the lowlands, but those disappeared quite a while back. I understand growers wanting the rare plants, but you just have to be prepared for losses. These are not houseplants that you can stick in a pot and water when you think of it. They require a significant commitment. And we don’t even have the time here to discuss the pests you will likely end up battling at some point: Mealy bug, scale, spider mites, borers, Exyra moths and so forth.

People growing Sarracenias in their own individual environments will also have to make adjustments. For example, those growing in the northern states will have to give them protection from the harsh winters, while growers in arid climates will need some way to keep the humidity up — a mister or misting system will typically be necessary depending on the number of plants. Thankfully, most hybrids do tend to require somewhat less attention. If I could emphasize one point, it’s water quality. Thankfully Sarracenias are not as fussy as many other CP. Still, you want to always try and give them the best water possible, which is usually captured rainwater or from an RO system, though these can get quite costly if you have a lot of plants. When I lived in California in the mid-1980s to mid-90s, I was very lucky and got by with a 50-50 mix of RO water and tap water. Right now I have a small lake nearby where I can collect water that’s remarkably free of dissolved solids in a pinch. My tap water can vary between 90 and 120ppm, but the lake water is around 10-15ppm.

MR: Any other words of wisdom?

JM: I find that letting the plants dry out every once in a while seems to be good for them as long as you don’t let them get too dry. If the growing medium feels damp, you’re okay, but never let them dry out completely — that’s a recipe for disaster.

MR: I’m sure there is a lot more details you could share with us, but I don’t want to impose.

JM: I’m happy to answer questions from individuals. Just drop an email to matt@carnivoreculture.com and I’ll try and answer as many as I can each time there is a new column online. I want growers to get the best from their plants, and this is probably the best way to do it on a consistent basis.

In our final installment, Jim and I discuss how to propagate Sarracenias from seed, so that’s something you certainly won’t want to miss. 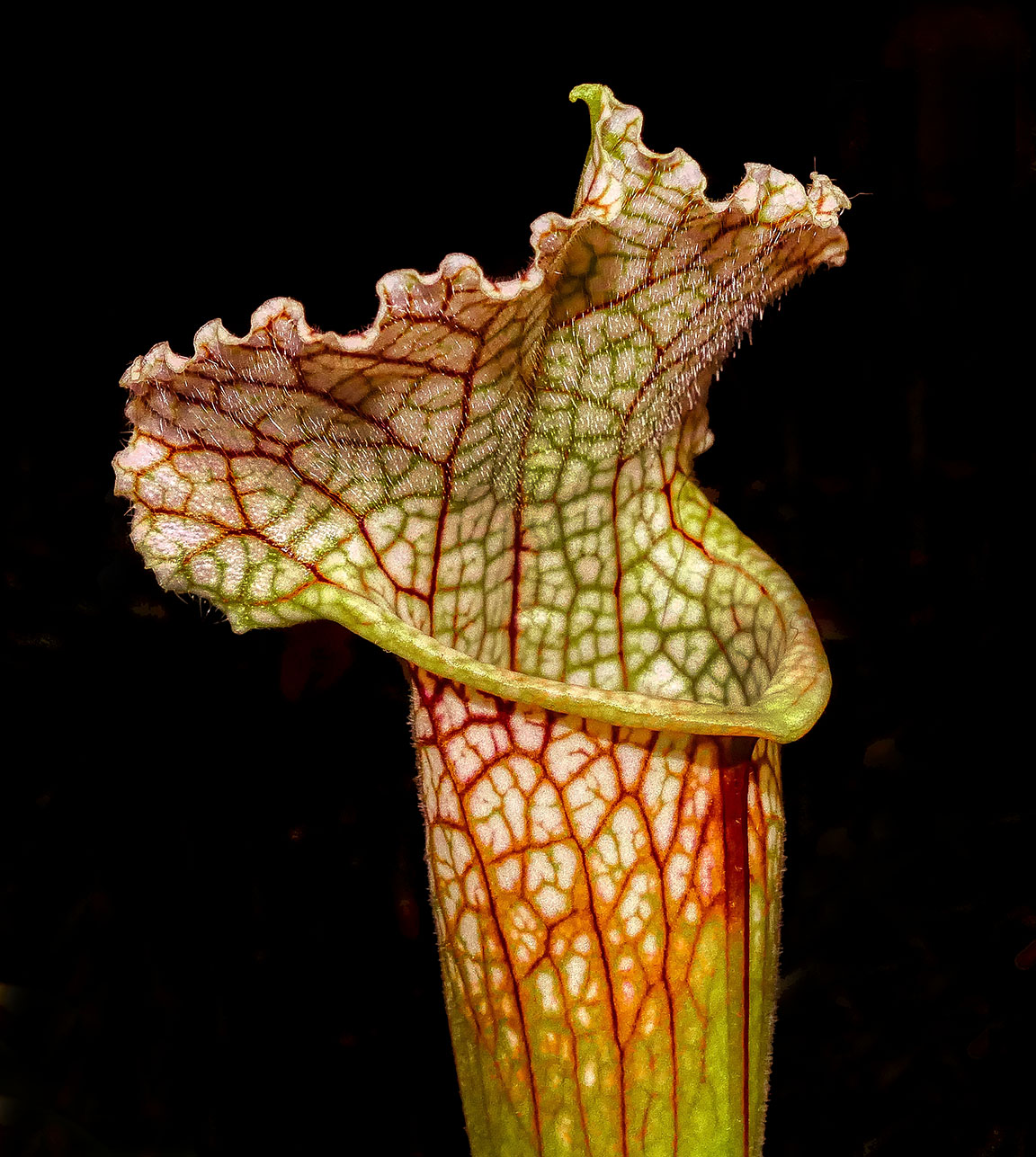 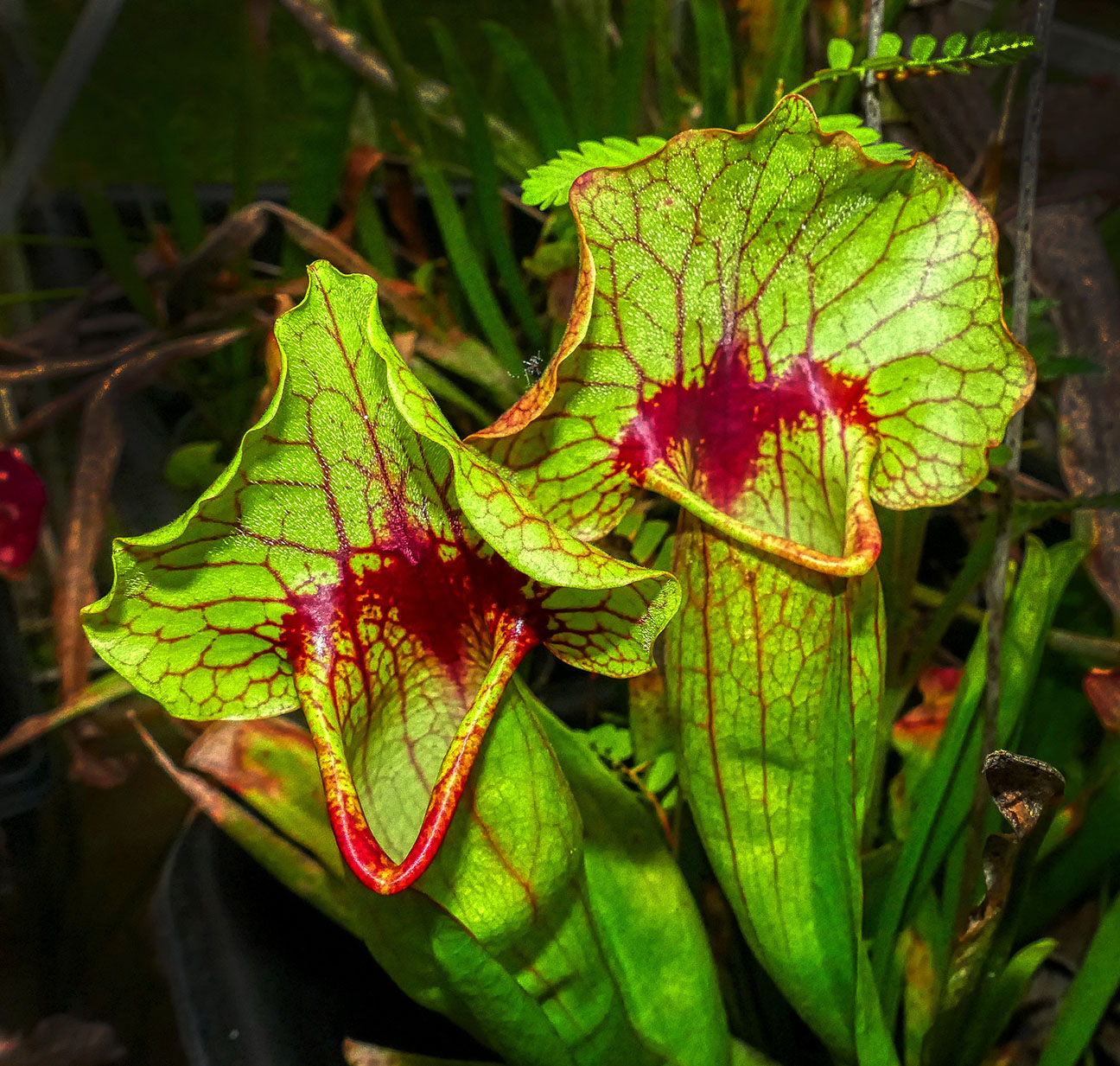 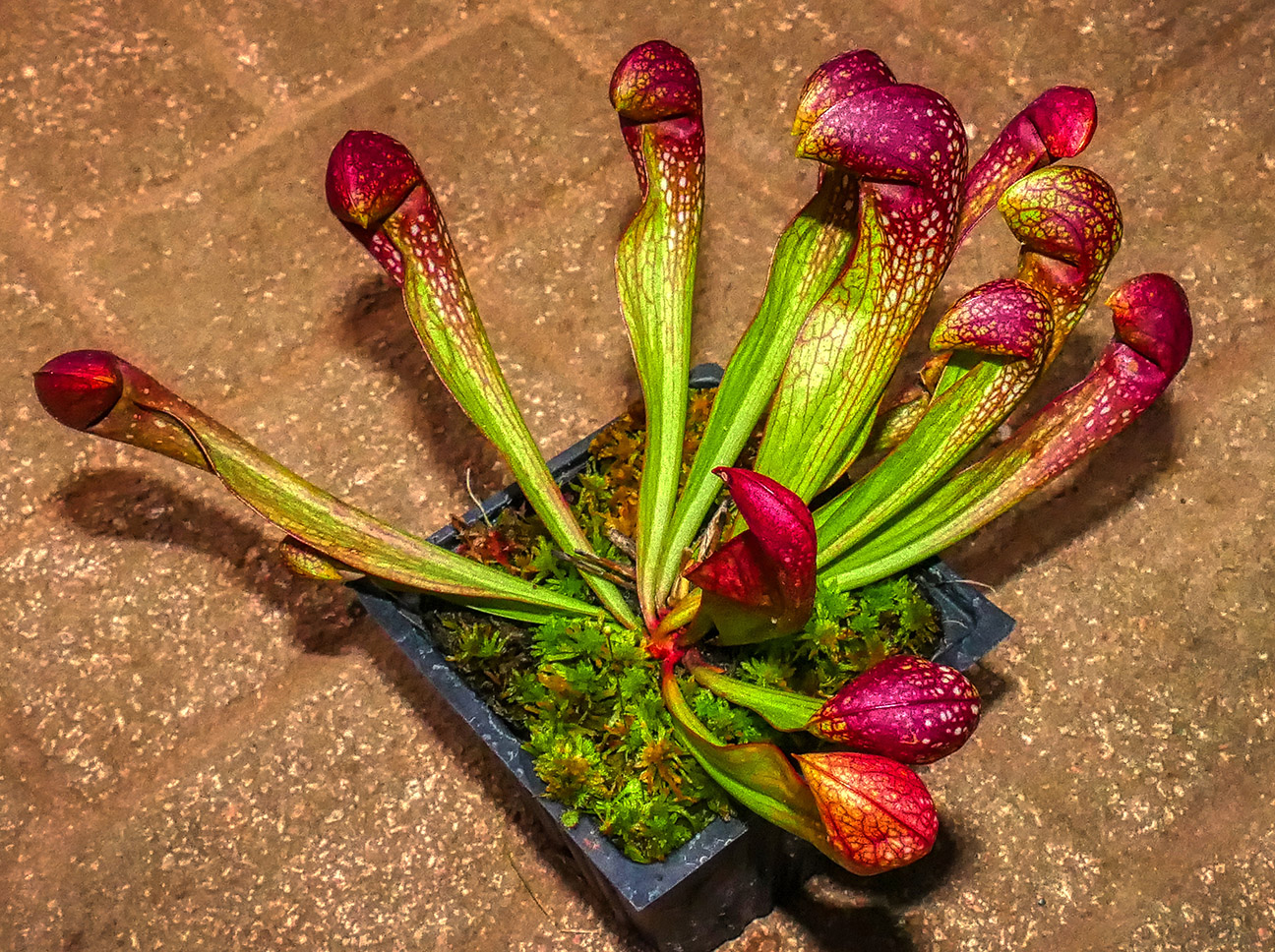 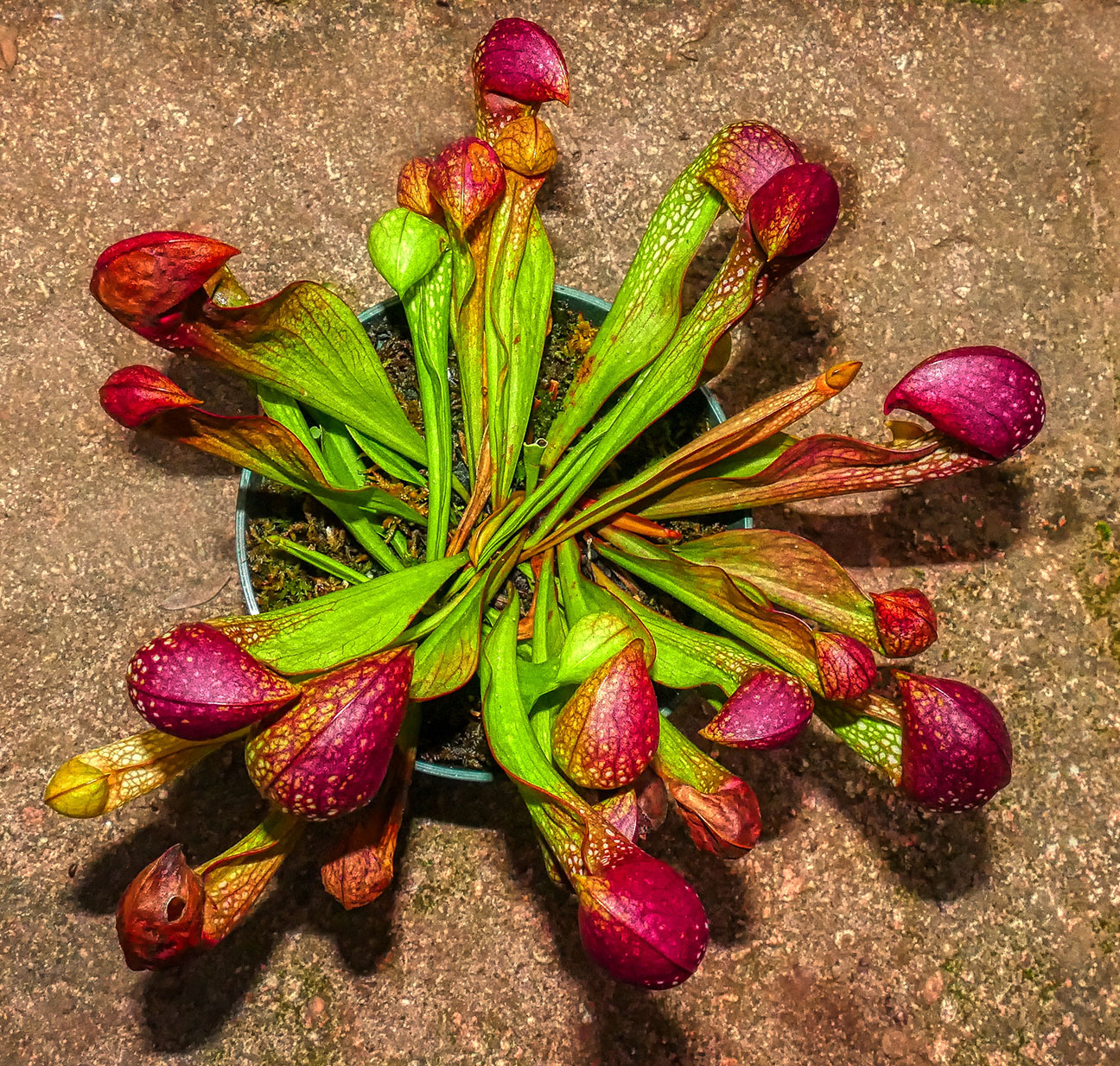