AN INSIGHT INTO SUMMER PINGUICULA CULTURE

John Lennon got it right when he wrote, “Life is what happens when you’re busy making other plans.” After I finished my first column, I was anxious to get all the topics in my head into my word processor for future posting here. But one thing after another led to constant delays. Car problems, an issue at my bank, helping out a sick friend (who was kind enough to share her nasty bug with me), a missing cat, a simple assignment at work that snowballed into a project of monstrous proportions … well, you get the picture, since odds are it’s happened to you a time or two.

Once things settled down, I found all the topics I had previously wanted to write about were just gone. It was as if my brain had taken an unexpected vacation. That is until I discovered my very first flowering Pinguicula gypsicola! Granted, it’s not an earth-shaking event, but it’s a big deal for me, as I have always had problems with this species in the past. This totally unexpected flower got me to thinking about the things I have learned over the last few years about successfully growing Pinguiculas. 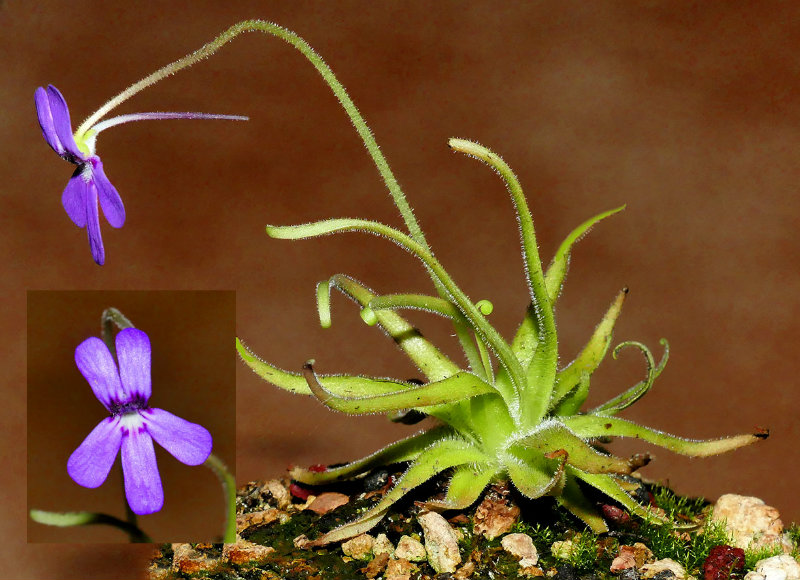 And Yes, this particular gypsicola was purchased from Carnivore Culture.

Like many of you, I grow my “pings” indoors under lights. In my case, a bank of three full spectrum 300-watt LED fixtures. Late last year I grew everything under just one unit, but this year, after discovering Carnivore Culture (after some particularly disheartening purchases off eBay) and thanks to several excellent trades, my collection more than doubled in size in just a few short months, leading me to add a second LED module. Most recently, after a round of propagating, I realized that many of the plants just weren’t getting enough light and I purchased the third light.

Back in the late winter and into the spring, everything was looking fantastic and I was pretty proud of the pings I had in my collection (some might even say I was a bit smug). But when summer hit us almost overnight in early June, I started losing plants. One was bad enough, but eventually it started to be an all too common occurrence. Some voracious worms were to blame for a few losses, but the others were more problematic. One day I’d admire a particularly robust plant, only to see a few days later that it had turned all soft and black at the center, resulting in much tooth-gnashing.

Here in the deep south, our winters are typically mild, followed by a prolonged period of glorious springtime weather. But summer made its presence known by quickly breaking record highs and our pleasant spring nights were replaced by sweltering temps that remained in the 80s until almost midnight. By July, our average nighttime lows would struggle just to reach the mid-70s just before dawn (normal is about 68-70). That all added up to skyrocketing utility bills that forced us to keep our thermostat set to 79 degrees. The thermometer in the room with my pings only making it down to 80 degrees most nights, and that is a real problem.

Many carnivorous plants grow in warm or even hot conditions, but those that grow at higher altitudes get a nice cool-down after dark, not to mention a fairly regular fog or mist. Out of desperation, I placed a box fan in the doorway to force the plants to cool down a little faster once the lights shut off, and that helped. I’m certain I would not have a flowering P. gypsicola without that fan. I also now keep chilled rainwater in the refrigerator and give the collection a regular misting with this.

I grow my pings in a mix of coarse vermiculite, perlite, horticultural sand, pumice and a little peat moss. This has been a far better medium for me than anything else I have tried. It drains quickly and is loose enough to allow the roots room to grow deep. You might know that the year I have my best collection of pings ever, we end up with the hottest overall summer on record, so regardless of the growing medium, the plants (and us humans) don’t receive the cool nighttime temps we prefer.

Pinguicula collections have gotten more and more popular lately. One reason is that there are more species and some very exciting hybrids in cultivation right now. They are also not outrageously priced and most collectors are willing to trade for species they don’t currently have. Let’s hope this trend continues.

There’s nothing we can do about the soaring temperatures, and I’ve found that plants that used to grow just fine outside, like Drosera capensis and adelae, must now be moved indoors. I had a beautiful pot of capensis that had been thriving for years that I lost last month. And my plans to try growing a few Heliamphora have evaporated with the sizzling summer heat. If you have been unexpectedly losing plants, I’d strongly encourage you to investigate ways of keeping them cool at night and maybe providing a bit more ventilation during the day.

We have a lot of money and care invested in our plants. I hope I’m wrong, but I don’t see us ever returning to the weather we experienced a decade ago. So take the necessary steps now before you lose a particularly treasured plant … if you haven’t already.